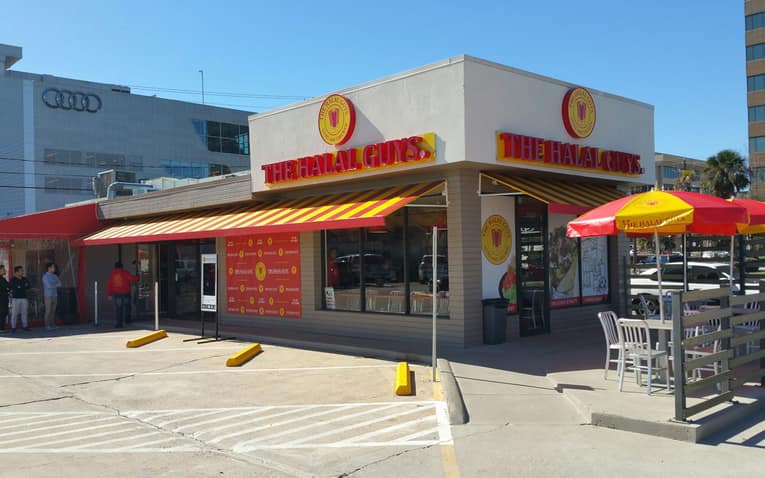 How The Halal Guys Built a Franchise Empire

The fast casual has become a franchise phenom with the backing of an iconic brand, dedicated fan base, and growing roster of passionate operators.

Some say the American dream is dead. Apparently they haven’t met The Halal Guys.

Long before food trucks ruled the streets of New York City, three men—Abdelbaset Elsayed, Ahmed Elsaka, and Mohammed Abouelenein—left their home country of Egypt, traveling more than 9,000 miles in search of a better life in the Big Apple. There, they held a string of odd jobs as kitchen workers and cab drivers before opening their own hot dog cart on the corner of 53rd Street and 6th Avenue. It didn’t take long for the trio to notice a niche in the market, with Muslim cab drivers constantly asking them where to find fast and authentic halal food in Manhattan. Their typical answer—“nowhere”—turned into “right here” when the business partners converted their hot dog stand into a halal food cart in 1990.

Since that day nearly 30 years ago, The Halal Guys has become a favorite with more than just Muslim cabbies. In fact, it’s become one of those rare New York icons that both locals and tourists flock to, often waiting in lines 50 people deep for a chance to taste the brand’s chicken, gyro, rice, and famous “white sauce,” whose recipe remains almost as secret and well-protected as that of Coca-Cola.

But after almost a quarter of a century in business—during which time it opened four additional carts across the city—The Halal Guys was ready to move up to the big leagues as an international brand. Talks of franchising began, thanks to the persistence of Fransmart, a restaurant franchise development company that’s helped the likes of Five Guys, Qdoba, and Elevation Burger launch and develop their franchise programs. For years, Fransmart founder Dan Rowe had been enamored with the uber-popular food cart, with its hordes of loyal customers, high volumes, and delicious food. “I said, ‘One of these days, I’m going to find a concept that’s sort of like these carts,’” he says. “I didn’t find one, but then I reached out to the group and I just fell in love with these guys.”

After more than a year of negotiations, The Halal Guys signed with Fransmart, officially launching its franchise program in 2014. Since then, the brand has built out its executive team—hiring industry veteran Mike Speck as chief operating officer, among other key hires—as well as developed a brick-and-mortar prototype, opened 69 franchise units, and operated two corporate-owned stores in New York.

“We had to make the conversion from a street business to a storefront business and, with that, develop all the operations systems, the prototype, and the practices that would translate across the world,” Speck says, adding that the brand’s goal was to build a prototype that was “throughput-, ROI-, and build-out friendly.”

The result? A store that’s 1,500 square feet on average, with a typical seating capacity of 25–35 guests. Rowe says the brand’s small-footprint, high-volume stores aren’t only attractive to franchisees, but also make it easier to find affordable real estate in an increasingly tough market. “They’re doing significantly more [sales] than a Five Guys out of 50 percent less space,” he says. “To someone who’s building restaurants and paying for rent by the foot, that’s super important.”

Not to mention a brand that’s famous and beloved in New York has the power to resonate throughout the world, as has been proved time and again with concepts like Shake Shack and now The Halal Guys. “It’s got a New York story, so anywhere outside of New York, that’s interesting,” Rowe says. “If a halal concept came from, say, Des Moines, Iowa, I’m not sure it would be as important.” Speck says keeping this New York–centric identity is key as the brand expands across the globe. “It’s something that no other brand can replicate, and it’s something we see resonates very well with our customers,” he adds.

“It’s still in such a young phase, but it’s one of the most popular brands in America, if not the world. We’re worldwide now, and people are just absolutely loving it.” — Logan Trotter, franchisee.

The founders’ passion for everything from food to customer service was yet another selling point for Rowe—and something franchisees appreciate as well. “You could sit down and talk to them for hours, and the conversation keeps coming back to the plate of food—how do you make the chicken perfect, how do you make the meat perfect, how do you build this perfect plate of food?” he says. “The last time I had that conversation with a brand was with Five Guys.”

This passion even translates into the hours the company operates, with some stores staying open more than 20 hours a day in the busiest markets. What’s more, when Hurricane Sandy hit New York in 2012—causing more than $68 billion in damage along the East Coast—The Halal Guys continued to serve chicken and rice platters to hungry New Yorkers despite the howling winds and driving rain. “The joke we heard was there were three departments: the police department, the fire department, and The Halal Guys department,” Speck says. “As the founders would say, ‘We’re different by being there when nobody else is.’”

It’s the brand’s streamlined menu that makes operating these long hours under any and all circumstances a whole lot easier. Serving authentic halal food—food that’s free from any preparation method or ingredient forbidden by Islamic law, such as alcohol and pork products—the brand’s lineup consists solely of sandwiches, meat and rice platters, hummus, baba ganouj, falafel, and baklava, available in generous portions at a good value. Platters typically ring in at $8.99 for a regular ($7.99 for a small) and sandwiches at $6.49, with an average in-restaurant check of $15.10 and an average online check of $28.50.

And with no major competition from another national Middle Eastern brand, there’s a gaping hole in the market for The Halal Guys to fill. “The only chain I can think of that’s offering gyros right now is Arby’s, and I don’t know if you want to call them competitors or not,” says Dennis Lombardi, president of foodservice consulting firm Insight Dynamics. “I think it’s nice that they have some competitive white space around them, but that alone is not going to make them successful.”

Authenticity, a strong customer base, a limited menu, and little competition were all factors that led Logan Trotter and Masroor Fatany to become two of the system’s first franchisees. Trotter operates five units in Louisiana, with three in development in the Miami area, while Fatany is the owner of three stores in Houston.

“It’s still in such a young phase, but it’s one of the most popular brands in America, if not the world,” Trotter says. “We’re worldwide now, and people are just absolutely loving it.”

Case in point: Fatany’s first Houston location opened in January 2016 with a four-hour wait, requiring a police presence to control the high traffic. (Trotter’s first downtown New Orleans store, meanwhile, had a three-hour line.) And this kind of fanfare isn’t unusual when a new location opens, Speck says. The Halal Guys marketing team creates grand-opening event pages on Facebook for each new unit, with 7,000–8,000 fans typically confirming they’ll attend. “What we’ve found through the years now is most of those people actually attend,” Speck says. “We see a lot of people on those event pages who will tag friends and say, ‘Hey, this is the cart we waited at in New York.’”

Franchisees like Trotter and Fatany can not only expect a built-in audience for their open and future units, but also an estimated startup cost of $300,000–$500,000, with a 6 percent royalty fee and 2 percent marketing fee. Each franchisee is required to sign at least five development agreements at $40,000 each, for a total minimum agreement cost of $200,000.

Although sales information for the privately held brand could not be disclosed, the company claims that based on average sales per unit per year, The Halal Guys is the second-highest grossing ethnic restaurant chain behind only Chipotle. But this sales success isn’t the only thing Fatany and Trotter appreciate about the business and the corporate team leading it.

“They’ve got a strong hold on supply chain, they’ve got a strong hold on operations. And as a franchisee, those are two important things we lean on the franchisor for, along with lowering our costs and finding new ways to improve,” Fatany says, adding that the brand’s mystery shops and food-safety checks allow him to hold his team accountable and ensure the same standard of excellence as the original carts. “They’re investing that time in making sure the brand is consistent throughout the country.”

As the company continues to grow, Speck and the team are looking for new operators to join their family of franchisees. Most appealing to them are local owner/operators who “live, sleep, eat, and breathe in the market they want to develop,” Speck says, along with a proven history of multiunit operations. “They’ve had boots on the ground, and they’ve experienced what it means to grow a brand in their market. But I also just love the idea of, ‘My kids go to school down the street,’ or, ‘I grew up over there, and now I’m developing a business here.’”

Though strong sales are a major selling point with prospective owners, Rowe says potential franchisees who are only in it for the money won’t be in it with The Halal Guys at all. “And if we get franchisees who talk about cutting corners—whether it’s with hiring the people or, instead of taking good real estate, they take cheap real estate—those franchisees get washed out,” he says. “Over the long haul, they’re just not going to operate the right way.”

With expansion on the brain, The Halal Guys has more than 400 units in development both in the U.S. and Asia, and recently opened up the U.K. to franchising. “There’s a billion and a half people in Asia, and we’ve only sold two or three deals,” Rowe says. “We could easily sell 23 deals over there.”

The brand is already operating in most of the top 40 media markets across the country—everywhere from Boston and Philadelphia to Phoenix, and Long Beach, California—as well as in Canada, Indonesia, South Korea, and the Philippines. But as The Halal Guys expands its reach outside of major markets to enter smaller pockets of the country, it is facing a bit of a challenge with brand acceptance and familiarity.

“It’s been very hard educating our customers on who we are and what we do. They’re simply just not used to or exposed to Middle Eastern street food from the streets of New York City,” says Trotter, who also operates units in Baton Rouge and Shreveport, Louisiana. “To combat that, we’ve done a lot of community events, fundraisers, and benefits where we go out and donate food and get a real opportunity to interact with customers in a more casual setting.”

Maintaining its strong momentum is another challenge The Halal Guys must contend with after coming fast out of the franchising gates four years ago. Lombardi says that initial rapid growth like that seen by The Halal Guys is unusual but not unique, with the real test being whether they can sustain that growth over the long run. To do so, the brand will need consistent, highly successful unit economics moving forward, “which means your existing franchisees are raving fans about their decision to go into it, stay in it, and be in the mindset of wanting to build more and more,” he says.

But The Halal Guys’ continued success is nothing Fransmart’s Rowe is concerned about. “This is one of the easiest brands I’ve been involved with,” he says, “and it will be one of the biggest things I’ve ever worked on.”

Article from QSR MagazineBack to The Halal Guys Page