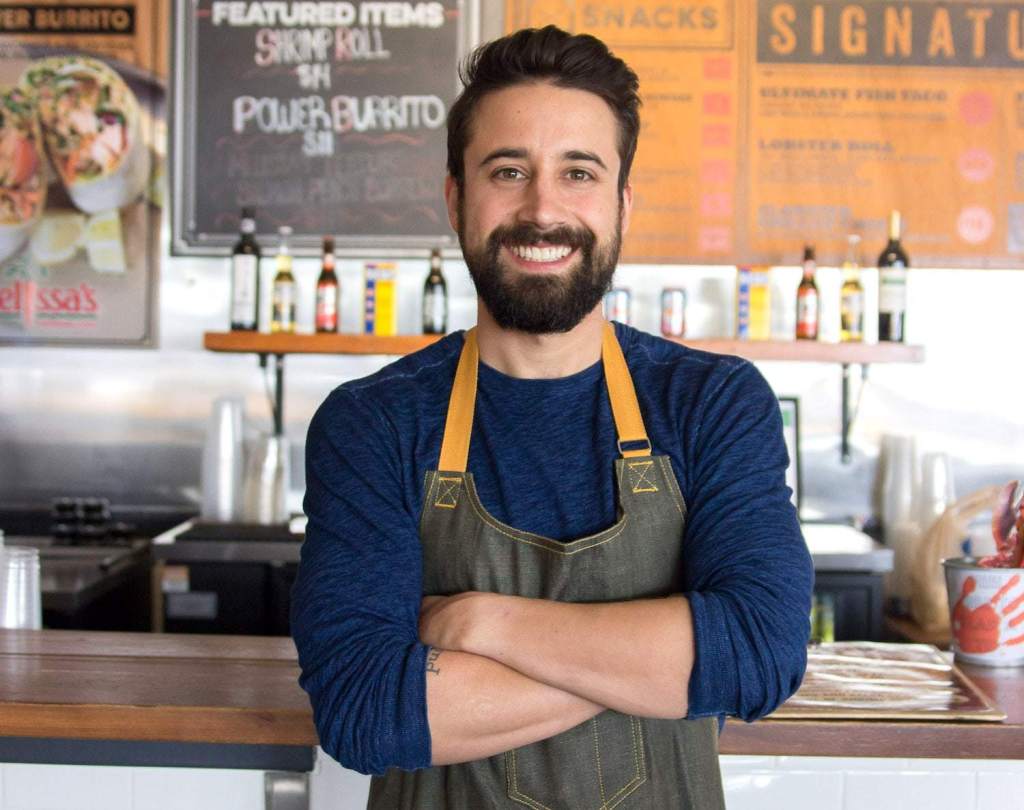 Chef Andrew Gruel bootstrapped his casual, all-sustainable seafood eatery Slapfish, quickly growing it from a food truck to six locations in Southern California with more to come soon. His goal: to get as many people as possible eating the right types of seafood. We sat down with Gruel to find out how Slapfish came to be, his unique approach to seafood, and his three simple rules for choosing fish.

Tavaner: Let’s start at the beginning: Tell us about one of your earliest seafood memories.

Andrew Gruel: Growing up in New Jersey, we vacationed outside of Charleston, South Carolina. I remember going fishing with my dad, hanging out at the dock and learning about fish. I was an obsessive fisherman as a kid—freshwater and saltwater—but I would never eat seafood. I was a really picky eater. It wasn’t until high school when a mother of a friend of mine, who was a really good chef, cooked seafood for me and I loved it.

From an avid young fisherman to a quickly growing business of casual seafood eateries in Southern California, how did you end up to where you are today?

It all started with my obsession with the kitchen and food, and by virtue of geography, I became immersed in seafood culture. I started working in restaurants on the coast of New Jersey. While going to college in Maine I learned all about seafood in New England. I worked in Boston for a while and did my apprenticeship in Oregon where I became familiar with the seafood in the Pacific Northwest.

I’ve always had an inquisitive nature in the kitchen. I wanted to know why we were serving the food that we were. I became interested in the economics of seafood by simply noticing the price fluctuations, and began studying the high-demand-low-supply nature of it, which led me to sustainable seafood.

Deciding to pursue my passion for seafood, I took a job at the Aquarium of the Pacific in Long Beach. As the chef, I was also responsible for raising awareness about sustainable seafood among other chefs. The goal was to get them to purchase more of it since the majority of the seafood that Americans eat is served in restaurants, not at home.

During my two years running the program, I noticed that the public wanted to eat more seafood, but that there really were only two options when dining out: 1. White table cloth, full-service restaurants, or 2. Long John Silver’s or McDonalds. There wasn’t anything in the middle. I decided that if my goal is to get people to eat more of the right kinds of seafood, a fast casual setting would give us the opportunity to scale quickly and redefine how we see seafood.

At first, I tried to raise capital, which failed miserably. I decided to do a food truck until I could build up brand awareness that I could then leverage to build a brick and mortar restaurant. Right now we have six open locations. We will have nine open by the end of this year, and twenty by the end of 2017.

So, with Slapfish, what is your unique approach to getting people to eat the right types of seafood?

Too often people decide what to order based on the type of fish in the dish, for example, salmon tacos. We developed a different approach that we call, “Choose the dish, not the fish.”

Our menu is relatively generic in the sense that we lead with the type of dish and its characteristics, say a fish taco, not the species of fish, which changes all the time. This gives us the opportunity to use lesser-known fish and is how we’re able to introduce more sustainable seafood species into our menu relatively easily.

How do you educate your customers about the types of seafood you choose to serve?

It’s really hard to educate consumers on seafood because it’s a contentious topic. There is so much media around the stories related to seafood, and everyone puts themselves into a certain camp and don’t want to hear anything outside of what they already believe. We’ve had to be very delicate in how we enter the conversation. Our approach is to celebrate seafood in general, get people addicted to our food and use that as a gateway into that conversation of why we serve the fish that we do.

For me, it’s all about the bycatch. The waste in the seafood industry is unbelievable, which is why I’m such a proponent of aquaculture. I’m a huge fan of fish farming when it’s done right.

What’s your go-to way to prepare fish at home?

Low and slow! The best way to prepare high-quality seafood is with a little extra virgin olive oil and fresh herbs and roasting it at 250 degrees for 25 to 30 minutes. It’s so simple, easy to do, easy to clean up and it keeps the natural fats in the fish.

Simply. We cook it on a griddle that isn’t too hot, sear both sides and give it a quick steam and it’s done.

What advice would you give to an up-and-coming chef or food entrepreneur who is interested in sustainable seafood?

Be adventurous. Try different species, use underutilized species and don’t be married to the salmon-shrimp-tuna mantra.

What fish advice would you like to leave our readers with?

Article from Australis, The Better FishBack to Slapfish Page