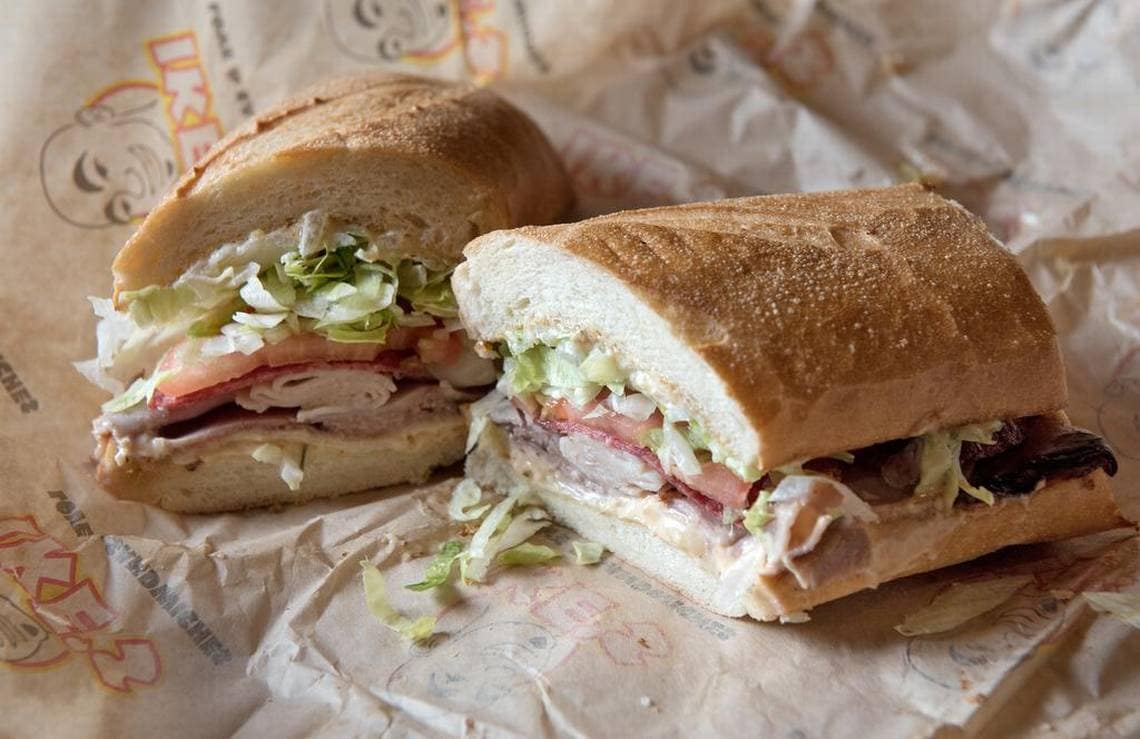 Ike’s Love & Sandwiches has opened in Turlock’s Monte Vista Crossings. The Bay Area-based company has gained a cult following for its sandwiches. A second store is coming to Modesto by the end of the year. By Marijke Rowland

Ike’s prides itself on serving up anything that tastes good between two slices of bread.And with almost 600 sandwich combinations to choose from, they just might be right. The Bay Area-born sandwich shops have gained cult followings for their plentiful offerings and crazy combinations.And now, for the first time, the brand has expanded to the Northern San Joaquin Valley. The company opened its shop in Turlock this week, one of two Ike’s Love & Sandwiches coming to the area. The other location in Modesto should open before the end of the year.The Ike’s Shop in Turlock’s Monte Vista Crossings shopping center took over the space that formerly housed Freebirds World Burrito. The upcoming Modesto site, at the corner of McHenry and Briggsmore avenues, is also in an old Freebirds site. Both restaurants were first announced in June.What makes Ike’s different from other sandwich places is its approach and style.

All sandwiches come on bread custom baked for them, most of it a signature Dutch sorta-crunch roll (softer than a traditional Dutch crunch roll). And all sandwiches come with the signature Ike’s Dirty Sauce (a creamy garlic aioli of sorts) baked into the bread and served warm. And even if your favorite sandwich isn’t on the menu at the store you’re in, Ike’s will make it for you.

Two of its most popular combinations — many of which were created by and named after celebrities — include the Matt Cain (named after the former San Francisco Giants pitcher. The sandwich includes salami, roast beef, turkey, provolone) and the Menage a Trois (halal chicken, honey mustard, BBQ sauce, honey, pepper jack, swiss and cheddar cheese). Each site also has location-specific sandwiches. In Turlock, they are the Green Acres (halal chicken, Ike’s green sauce, pepper jack) and the Mitchellville (vegan turkey, Ike’s green sauce, provolone).

The sandwiches are behemoths, and saucy behemoths at that. But if your appetite stretches even wider, you can always order up a Kryptonite. The massive sandwich includes all of the meats on the menu as well as mozzarella sticks, jalapeno poppers and onion rings — among other things — and will set you back $30. But most sandwiches run between $8 and $11. Lest you think Ike’s is just a meat-a-palooza, the restaurant also offers several vegetarian options, as well as gluten-free and halal choices.

“If you want to come here to eat, we’ve got something for you,” promised Ike’s Chain Director Paul Fitzpatrick.

The interior (and exterior) prominently features Ike’s founder and namesake Ike Shehadeh’s smiling face on its walls. The rest of the decor includes a variety of vintage lunch boxes and painted sayings like “It’s Not A Sandwich, It’s An Ike’s.”

“We want (Ike’s) to be fun, flirty and a good time for people when they come in,” Fitzpatrick said. “But we also want to provide excellent service and get people sandwiches as quickly as we can.”

In about two weeks, that “quickly as we can” will include delivery from the online services DoorDash and Uber Eats.

The brand’s popularity has been bolstered by appearances on TV shows like Travel Channel’s “Man v. Food” and shout-outs from ESPN. Tuesday was the first day for the Turlock shop, and by Wednesday, a steady stream of people came in for lunch — some who had had Ike’s elsewhere and others new to the experience.

“About a third of the customers so far have been to an Ike’s already. Or they saw it on TV. The cult just follows it all the way to the valley,” said Ike’s Turlock General Manager Michael Turner.

The exclusive Modesto menu items have not been decided yet, nor has the exact open date been set. But Fitzpatrick said hungry Modesto customers should be able to get their fix within three weeks.

Article from The Modesto BeeBack to Ike's Love & Sandwiches Page