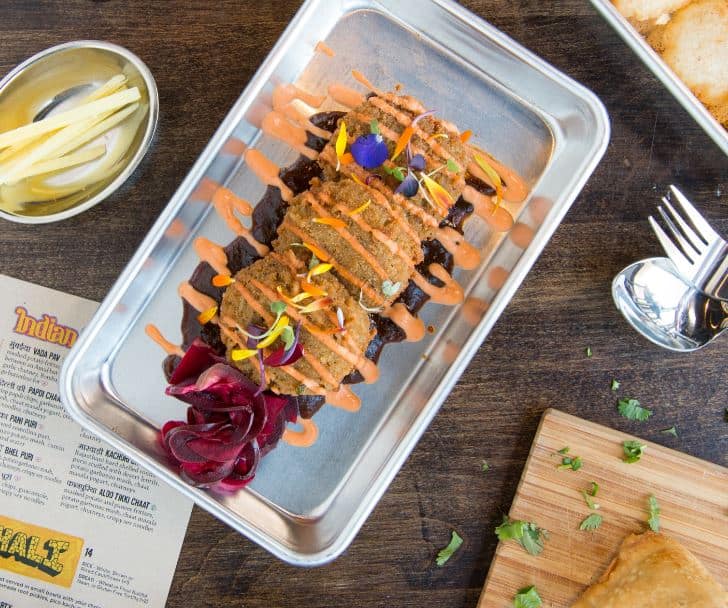 Curry Up Now will make its foray into the Midwest via expansion across Indiana, with plans to develop Curry Up Now locations beginning in the new year in the greater Indianapolis area, then moving into college towns like Bloomington, West Lafayette, South Bend, and eventually into the Chicago suburbs.

San Francisco, CA  (RestaurantNews.com)  Curry Up Now, the largest and fastest growing Indian fast casual concept in the United States, will make its foray into the Midwest via expansion across Indiana. The restaurant has finalized a multi-unit franchise deal for the entire state of Indiana, with plans to develop Curry Up Now locations first in the greater Indianapolis area, and then moving into college towns like Bloomington, West Lafayette, and South Bend, and eventually into the Chicago suburbs. The first outpost is slated to open in fall 2020 in downtown Indianapolis, a location chosen for its favorable demographics, workforce numbers, high population density, and for being the epicenter of hip and exciting new concepts.

The Curry Up Now expansion is being fueled by local franchisees, successful entrepreneurs, and lifelong friends, Bill Morgan and Rick Renner. Morgan’s business background is largely within the non-fiction television business, where he worked as a producer on various nationally-syndicated series and also owned his own production company.

Renner’s background involves renewable energy consulting and startups, and has also spent time in India on business, where he first fell in love with the country’s rich culinary history.

“From the moment we heard about Curry Up Now and tasted the food, we knew it was a special, out-of-the-box, and authentic brand that has the momentum to cross over all societal and regional demographics,” said Morgan.

Renner adds, “Akash and Rana have created a category-busting, delicious product that we feel will be well-received by residents across Indiana. We look forward to the years to come as we expand in the state and fulfill the potential that Curry Up Now offers.”

Curry Up Now began as a food truck, founded in 2009 by husband and wife duo, Akash and Rana Kapoor, and ably supported by co-founder and Senior VP of Operations, Amir Hosseini. Since day one, Curry Up Now has been on a mission to serve Indian flavors and ingredients in a way that is more approachable for the everyday American consumer, via formats that are more recognizable in the mainstream. Their signature dishes include Tikka Masala Burritos, Deconstructed Samosas, Indian-style tacos, Naughty Naan and more, alongside a menu of Indian street food snacks and more traditional dishes like Thali Platters, Kathi Rolls, and Bhel Puri, among others. In the last ten years, Akash and Rana have expanded the Curry Up Now empire to include three food trucks, seven brick-and-mortar restaurants that span both coasts, and a globally-inspired craft cocktail bar concept, Mortar & Pestle, that is housed within two Curry Up Now restaurants.

“We’re thrilled that Indiana will be our entrance into the Midwest market, as it is central to the region and has many markets that are attractive to Curry Up Now, such as large urban cities, bustling college towns, and large city suburbs,” said Kapoor. “Bill and Rick are well-connected in the region and have a proven track record of building successful businesses, so we have a ton of confidence that they are the perfect partners for growing Curry Up Now across Indiana.”

The Indiana expansion joins more than 40 Curry Up Now locations in varying stages of development across the country. In 2018 and 2019, Curry Up Now solidified multi-unit franchise deals in many major U.S. regions, including the West Coast, Mountain States, Midwest, Northeast, and the South. Four Curry Up Now locations are slated to open before year’s end in Irvine, Sacramento, Hoboken, and Salt Lake City, which will expand the brand into four brand new markets from coast to coast.

Experts in the hospitality industry project that Indian food will continue to be the fastest growing ethnic food segment in the U.S., solidifying Curry Up Now’s spot as the largest and fastest growing concept in the Indian fast casual segment. Curry Up Now has also been recognized by the restaurant industry’s top publications for its innovative approach to Indian cuisine and huge potential for growth, including being included in Inc. 5000’s list of fastest growing private companies, QSR’s 40 Under 40, Nation’s Restaurant News’ 2018 Breakout Brands, listed as #20 in Fast Casual’s Top 100 Movers & Shakers 2019, and named a Hot Food & Beverage Chain by the International Council of Shopping Centers.

About Curry Up Now

Curry Up Now was established in 2009 by Akash Kapoor and his wife Rana, and ably supported by co-founder and now Senior VP of Operations, Amir Hosseini. The concept, which is known for its innovative spin on traditional Indian cuisine, has been recognized in publications such as Zagat: ‘5 Hottest Fast-Casual Chains,’ EATER SF: ‘SF’s Best Indian Restaurants,’ 7×7: ‘100 Things To Eat Before You Die,’ QSR: ‘40 Under 40,’ Fast Casual: ‘Top 100’ Movers & Shakers, Nation’s Restaurant News: ‘2018 Breakout Brand,’ and International Council of Shopping Centers: ‘Hot Food & Beverage Chain.’ Curry Up Now currently operates seven brick-and-mortars and three food trucks, and has both corporate and franchised units in development across California, New Jersey, Colorado, Utah, and Atlanta, GA. For more information about Curry Up Now, visit www.curryupnow.com

Article from RestaurantNews.comBack to Curry Up Now Page