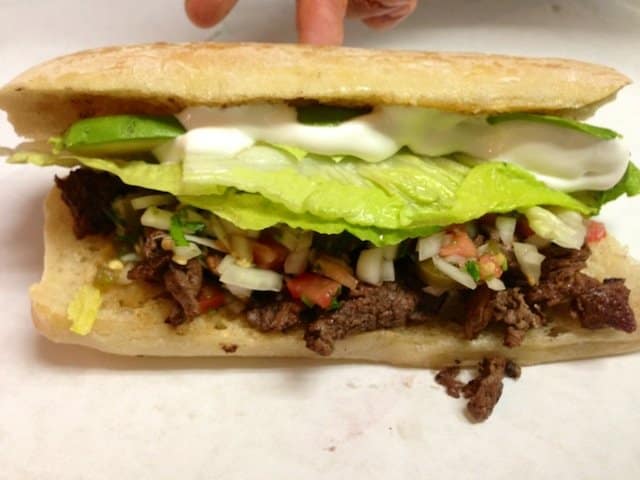 Elyan Zamora and her parents, Elvira and Antonio Zamora, are changing the way diners think of traditional tortas. At Cook’s Tortas in Monterey Park, Calif., bread that requires a two-hour long baking process and authentic recipes from Elyan’s abuelita are among the ingredients breaking the mold from regular Mexican torta cuisine.

The restaurant has been a family effort since Cook’s Tortas opened its doors in the Spring of 2008. “My mother comes in every morning and makes the corn cakes. The family has their own parts of the restaurant that they contribute everyday,” Elyan says, noting that her father deals with with the food distributors and handles public relations tasks.

Before owning Cook’s Tortas, Elyan and her ex-husband, Ricardo Diaz, owned the now-shuttered Dorado’s Ceviche Bar down the street from the family’s current establishment.

A conversation at a family reunion became the catalyst for the Mexican sandwich shop: The couple was searching for a new foodservice concept, and Elvira suggested tortas.

Because they emigrated from Mexico—Antonio from San Luis Potosi and Elvira from Mexico City—the owners understood the popularity of tortas within the Mexican culture. So tortas, they decided, would be the new restaurant’s focus. The creativity and quality for which Dorado’s had been known carried over to Cook’s Tortas’ menu.

“[Antonio], being a chef said, ‘Why don’t we give it a twist and make a different bread and different recipes?’” Elyan recalls. “My mom pulled out her recipes, he pulled out his recipes, and we started making the tortas.”

Instead of using traditional bollilos, the restaurant makes their own rustic bread in-house daily to ensure freshness.

“We are very proud of our roots and we really enjoy serving great food to [customers from] all the different cultures and ethnicities,” Elyan says.

A chalkboard wall serves as the restaurant’s menu. Each torta has a number with significance to Elyan and her family.

The Cochinita, a torta featuring Yucatan-style pork, onion, escabeche, black beans and crema, is Number 301—Elyan’s grandmother Petra Zamora’s home address. The Bacalo, made with Spanish-style cod, roasted red peppers, garlic, olives and slowly cooked, is Number 25 because it is the torta the Zamora family eats at Christmas. Both are made from recipes handed down from the family’s matriarch to her daughter. Petra’s secrets are now Elvira’s.

The Zamoras are committed to serving customers high-quality products, and consequently put a premium on freshness. No freezers are allowed in the restaurant, and what gets delivered in the morning is what gets served that day. “We are used to fast food and cheap products and something that is not expensive,” Elyan says. “But at the same time, we deserve to have good-quality food.”

Common wisdom holds that working daily with family members can be challenging. Yet Elyan says being in a business relationship with her parents has its perks. Everyday the family gets together and has a meal at the restaurant. “We are fans of our own food,” Elyan says. “Sometimes we like to make different food in the kitchen and we sit down and eat together. It’s a family. We spend a lot of hours in the kitchen together.”

The family aspect of the kitchen has also spilled over to employees, thanks to Elyan’s approach to the business. She does not like to run the restaurant like she is the boss. Rather, she thinks of her staff as family and invites them to feel the same way about her.  “If it’s someone’s birthday we bring cake and we sing happy birthday and we do different things,” Elyan says.

Elyan’s nine-year-old son Fausto has inherited his love of the family business and, apparently, his parents’ entrepreneurial gene. He comes to the restaurant eager to help. “My son loves it. He’s here all the time and he wants to help,” Elyan says. “He’s growing up in the business… so he’s looking forward to having his own restaurant when he grows up.”

Inheriting Cook’s Tortas, however, won’t be a given. “He will have to love the business and deserve it,” Elyan stresses.

And if this restaurateur’s plans to branch out with more restaurants in the surrounding area work out, there will be an even bigger business to inherit. “We want to keep it in the family, though,” Elyan says. “It has become our second home.”