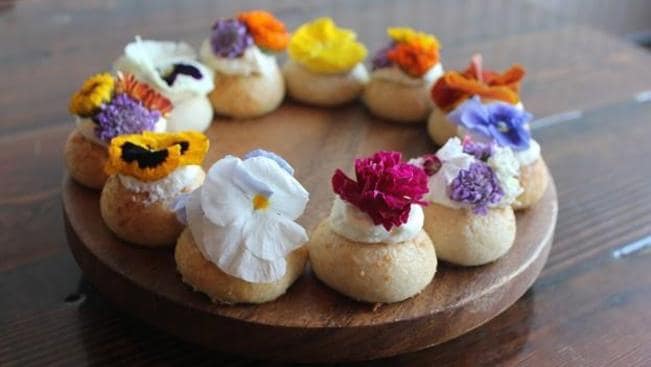 What if the head-topping symbol of the desert festival popped up in dessert form? It’s no dream, pie people.

You can’t spell “dessert” without using all of the letters in “desert,” plus that all important extra “s” (something that most people have missed at some point while accidentally interchanging the two words).

And while the two concepts don’t seem to share a lot of real estate, spiritually, with one being a drier earthly expanse of nature and the other involving sugar and flavoring, “desert” and “dessert” do meet up, sometimes, in the most whimsical of ways.

Take the flower crown, which, over the middle two weekends of April 2019, will be seen, again and again, at the Empire Polo Grounds in Indio.

For the head-topping wearable is one of the classic sartorial sights of the Coachella Valley Music & Arts Festival, and plenty of guests’ll be sporting the noggin-topping blossoms.

But back in Los Angeles?

There are Flower Crown Pie Holes to enjoy, at The Pie Hole locations. The boutique bakery just created the confection, in honor of Coachella, so, yes, you should get yours while the festival is happening (final date: Sunday, April 21).

To note? One Flower Crown Pie Hole, which is sort of a small, two-bite pie, is $1.50. So if you want to make a complete crown, to present on a plate, you’ll probably need to purchase at least eight or nine Pie Holes in all.

This Peeps Shake Brims with Rainbows and Magic

And if you don’t want to think of your sweets as a flower crown, you can buy them singly in honor of wildflower season, which continues in Southern California.

Yep, each bite-able goodie is topped “with a creamy whip and colorful spring flower.”

While Coachella takes a break between its two big weekends, the Flower Crown Pie Holes will not. They’re available right through to April 21, including on the weekdays when the festival is lights-off.

Who doesn’t love a desert dessert?

Article from NBC Channel 4 NewsBack to The Pie Hole Page